How great is it that trees have their own holiday? Flowers don't -- unless you count Mother's Day.

In 1872  J. Sterling Morton, a Nebraska editor, initiated the 1st arbor day. Along with many other recent settlers to the prairies, he felt something was missing: trees! He wanted to plant trees for shade, for fuel and as windbreaks to prevent erosion. Morton, who later went on to become Secretary of Agriculture, thought big: over a million trees were planted on that first arbor day. Contests were held, communities competed -- and other states -- and eventually more than 30 other countries -- followed suit.

Although a little less ambitious than Morton, our Almstead arborists like to participate in Arbor Day planting every year. This year, the New York chapter of the International Society of Arboriculture featured arborists Michael Marks and Jon Olsz in their Arbor Day news on their website. http://www.nysarborists.com/index.php/20-events/48-2012-nys-arbor-day-celebration 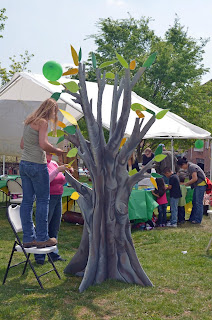