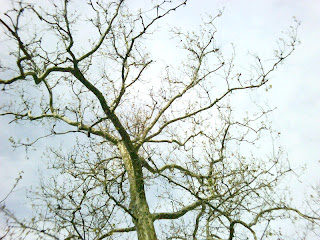 With the cool, wet weather we've been having this Spring, tree diseases have been showing up more than usual this year. Pathogens like Anthracnose fungus thrive in this type of weather and tend to peter out when it gets warmer and drier, so their window to cause damage is a lot longer than usual.

For instance, Anthracnose might usually harm only a small portion of this London Plane tree, but this year it is almost entirely leafless, with small, stunted growth where there are leaves. You can also see witch's brooming, where the tree is pushing out new twigs around spots that were killed by the fungus. 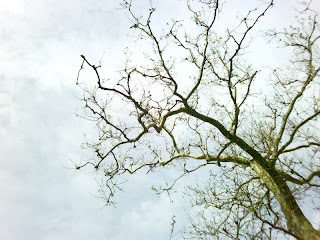 Trees can come back from these diseases, although they may need extra care and/or fungicide treatments. Everything should really be in full leaf by now, so if it looks like your tree is getting a slow start, it may be because of a disease like this.

- Ken Almstead, Arborist in Westchester and Riverdale
Posted by Almstead at 2:13 PM

These 6 White Oaks (Quercus alba) located in Harmon Park in the heart of Pelham range in age from 80 to 120 years old. The primary original root flares of these trees have been buried throughout many years, most likely in attempts to grow grass. In some situations, the soil was almost 2 feet higher than it should be on the trunks.

Originally, Almstead was contracted by the town to prune this grove of White Oaks (a very valuable tree species, especially in maturity). When I discovered the soil compaction and deep burying of the root systems, I recommended that air spading be performed in order to improve the health and extend the lifespans of these specimen trees.

Once we began air spading, it was obvious that secondary or adventitious roots were forming, which are not viable as a stable root system for trees this size, as well as girdling roots. In addition to removing the excess soil, these roots were pruned away.

We also performed vertical mulching throughout the critical root zones of the trees (out to the edge of the canopies). We used the air spade again, but this time to dig 3" diameter holes 10" deep. The holes were spaced at 3 foot intervals throughout the root zones. This is a great way to reach the entire root system without tearing up a whole lawn!

After digging the holes, they were filled with organic compost and a combination of organic soil amendments, including humus, molasses, seaweed extract, and others. These amendments all help to invigorate the natural biological processes that keep soils and roots healthy. We also added zeolite, which is an organic product that keeps air passages in the soil open -- this is a great additive because air is an essential element of healthy soils (not just water, which seems more obvious).

This was discovered by me and recommended to be performed for preservation of these trees when we were contracted to prune the grove of primarily oaks throughout the park area, town hall, harmon park and memorial park.

- Ken Almstead, Arborist in Westchester and NYC
Posted by Almstead at 1:21 PM