If you build it, will it fall? 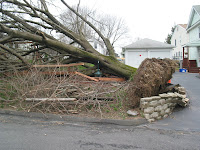 We saw many ways trees can fail, in whole or part during the storms encountered this year. Some were unavoidable in the above average winds, many we may have had a hand in creating. Our quest for more and more paved surfaces has had a less than desirable effect on the urban forest and in many cases has created safety issues that may not be easily detected. 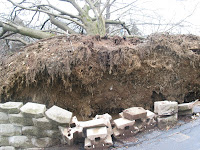 Case in point: this tree began the downward spiral when the decision was made to put in a driveway and retaining wall. The original root system was compromised by a cut-and-fill and the support system on the driveway side ultimately became inadequate to support the massive canopy above. When the winds gusted to seventy miles per hour in a direction against the damaged root system below, down it came. Fortunately little more than a play-set and some landscape fixtures suffered any serious damage.

If you see a similar situation in or around your property, it’s best to get a professional opinion before the next storm rears its head.
Posted by Almstead at 10:15 AM